The infamous Courtney Stodden is apparently continuing to develop her acting bug. She's made a commercial for some company playing the role of a mermaid fished from the sea by two young men. One of those young men happens to be Asian (Peter Kim, according to the credits). You can find it with a search, I'm sure, if you want to see it.

Sadly, despite the fact that he 'gets the girl' in this sketch (or, actually, half the girl considering her fishy nether regions), his role is once again as a caricature of an Asian man living in the West. He wears nerdy glasses while he fishes off the cliff, and speaks in a heavy, halting, broken accent - repeating the phrase "I score!" several times.

References are then made to 'hooking up' in connection to 'scoring' by his fellow fisherman (played by Steven J. Robinson), just to make sure the audience is in the correct mindset for the next gag lined up to play on stereotypes. His first catch of the day is a smallish fish while the background music switches to a pseudo-Asian twang. His buddy proclaims it only an appetizer in frustration - since he is starving by now.

Oh, I see what you did there... yeah - a small fish - and all those other symbolic implications of small in reference to Asian men. It's all resolved of course when the Kim character gets a "bigger hook". I can only shake my head at such ham-fisted story lines - even in this small change commercial.

Courtney wearing a tail is then hauled onto shore so that she can flop around and prune up her face in her trademarked weird looking, non-sexy convulsions while making an overly obvious double entendre. Just more blah, blah, blah at this point. Nothing original or creative here.

Promote Your Page Too

8 Red Gates
We believe that there has been a slowly building Asian Renaissance in the West for the last 20 years - and that the level of interest has increased dramatically in the last 10. We feel that Western audiences are ready to embrace the art, culture, history and heroes of the East but that they need more exposure to develop their palates and knowledge. Our goal is to become that 'gateway', that 'open door', that 'bridge' to information... we are developing an online 'whistle stop' to make it as easy as possible for people to learn who and what is out there, where and when they can experience it, why it is important... and so forth. For Asians (both native and Western-born) and non-Asians. We are committed to educating and molding the Western mainstream to develop a taste and respectful appreciation for the aesthetics of the East. 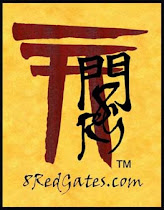